How to transfer ownership of a Google Places listing, fool proof way!

How to transfer ownership of a Google Places listing

If you’re really unlucky you may come into a situation like i did. Get ready for some heart-ache, I spent a good month or more trying to resolve this issue and this is something you will not find a clear answer in Google for, despite how much research you do, so hopefully this article will help others.

We recently was faced with a situation where one of our clients was starting an SEO campaign and part of the setup process was to open a Google account for them if they never had one for Analytics, Maps, Google Plus, Webmaster tools and other Google apps services. Upon asking the client if they already had a Google account they had no recollection that they ever did and did not have a Gmail account so as figured lets move on and create this client and account.

As you may know its a very long and drawn out process to get a Google account and all its associated service up and running “correctly”. We were about %80 into the setup and we noticed that when we tried to claim the business which was found in Google maps it was already taken and ownership was with someone else ? What theeeee ?

I asked the client if they were sure they never had or signed up and claimed this listing. They said they never did, so i thought maybe someone they know did. As it happens we were stuck between a rock and a hard place. No access to the “other” Google account which this listing was claimed and we could not claim this business because its already been claimed and owned by someone else. Damn!

Thankfully there is an option during the ordeal to ask the “admin” of the other Google account to release and transfer ownership to you. However this is a very automated process the most you can do is get Google to send them an email to release the listing for you to claim or accept the transfer to you. It is not very intuitive, no surprise anything Google related when it comes to a problem is very annoying and generally gets under everybody’s skin.

In this situation the most we could do is ask the owner to accept a transfer of ownership. It also states that Google will look into the problem. They do not give you a time frame or what the next steps will be. We hit a brick wall.

It has been about a month and a bit. I just received an email notification from Google that after reviewing the account they have decided to release the ownership and we could gladly go ahead and claim ownership again. Yippee! 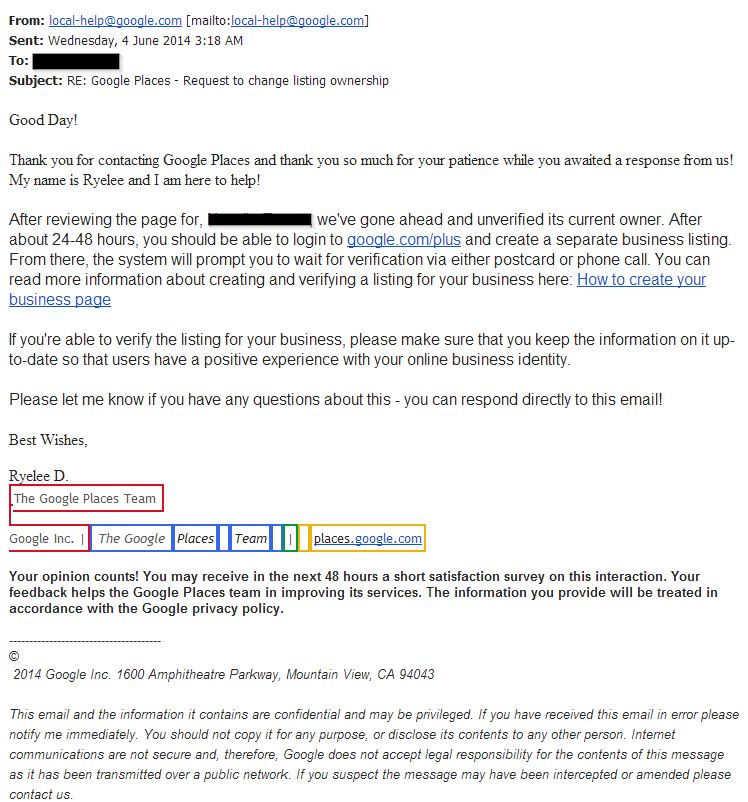 I almost lost faith in Google as i thought it would be a dead end to transfer ownership of a Google places listing, but they delivered the goods, despite it taking over a month.

In conclusion if you run into this problem where you simply do not have access to the Google account that the Google places listing is associated with, ask to Google to transfer ownership of a Google places listing. In some cases if there actually is a person associated with the account they will transfer it, but if all else fails Google will (should) get back to you and release the listing as they for us.

This above process can be daunting if you have not faced it before, so if you do happen to come across this and need to transfer ownership of a Google Places listing, leave us a comment below or send us a support request and don’t forget to share this article by using one or more of the social icons below 🙂